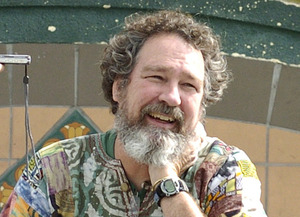 Longtime theatre professor Bill Morse passed away July 18 from a heart attack at the age of 57. He served at Cal Poly Pomona for 27 years and the last 14 years as department chair.

Morse, who lived in Altadena, retired in June and had planned to continue teaching during his retirement.

“It’s impossible to put into words just how great a loss this is to those of us who knew Bill as a colleague, friend and teacher,” says Carol Richardson, dean of the College of Letters, Arts & Social Sciences. “It’s equally impossible to imagine the theatre department without him.”

Morse taught lighting design and scenic design, as well as the history of theatre. However, his accomplishments at the university went far beyond the classroom. Richardson credits him with building the theatre program into an outstanding “jewel” that was is well-respected in the theatre community.

“Bill spent his 27 years at Cal Poly Pomona building that program and moving it forward,” Richardson says. “Bill was the most amazing and sweet, dedicated guy. He was probably the best loved guy on campus.”

Linda Bisesti, associate theatre professor, describes Morse as a wonderful professor who showed kindness to everyone. “He was the best colleague one could have. He was a brilliant designer and a compassionate and dedicated educator.”

Morse, a gifted speaker, was always willing to listen to others’ opinion, remembers Richard Kallan, chair of the communication department.

“He was easy to talk to because he wanted to hear what you had to say. He was driven by civility and a sense of community,” Kallan says. “What impressed me even more, though, was how persuasively he would present his position. His arguments were articulate, cogent and logical. I was glad I nearly always agreed with him! Now I’m sad I won’t get to continue to nod my head in his direction.”

The family will hold a private funeral service. A public celebration of life is scheduled at Cal Poly Pomona’s University Theatre on Sunday, Sept. 19 at 4 p.m., which will include a screening of “The Big Lebowski.”