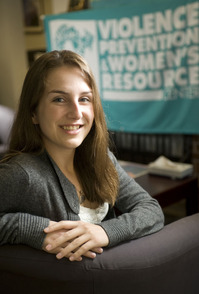 You’re standing in the University Quad when you see a young man screaming at a woman and waving a large stick. What do you do?

It’s a scenario that psychology student Hayley Armstrong has shared dozens of times. There are several approaches: Call the police; try to intervene; distract the man; enlist a friend to help calm the situation. The point, Armstrong says, is to not be silent but to empower yourself to make a difference.

“Being silent is basically acquiescing to the violence and saying it’s OK,” she says. “Right now, we maintain a culture of violence that supports one in three women around the world who will be beaten or raped in her lifetime. We can fix this, but we need everyone together to do it.”

A student assistant in the Violence Prevention & Women’s Resource Center, Armstrong leads discussions about domestic violence and sexual assault and helps promote the center’s workshops and programs. Occasionally, she’ll counsel a crisis victim or accompany a client to court to file for a restraining order.

Although Armstrong can recite grim statistics about sexual assault and domestic violence in the United States and worldwide, she’s hopeful that change is within reach. She believes that open and frank discussions about sexuality and sexual violence, as well as education, can help reduce the frequency of rape, sexual violence and other offenses.

Four years ago, sex was a conversation topic that was whispered among friends. Now, Armstrong confidently shouts “Hey hey, ho ho! Domestic Violence has got to go!” into a microphone during campus rallies.

“I underwent a personal transformation,” she says. “I learned about myself and what it means not only to be a woman but a person in this world. I wish I could share it with the world because it’s so integral to who I am now.”

During her first week at Cal Poly Pomona, the Napa native began volunteering at the Stop Violence Office, which has since become the resource center. She learned about the problems of sexual violence and domestic violence, and even learned of instances on campus. Instead of feeling overwhelmed, Armstrong was motivated to educate and empower those around her to help make a change.

One of the outlets is the annual production of Eve Ensler’s “The Vagina Monologues.” Shocking and obscene to some audience members, the intense stories are intended to motivate people to action, Armstrong says. She’s also part of the Female Sexuality Society, a confidential group that discusses sex and personal experiences.

“I think a lot of women are so uncomfortable about talking about sex and don’t know where to get help,” she says. “Groups like the Violence Prevention center and the Female Sexuality Society offer support.” She adds that the Men Against Violence group offers a forum for male students to discuss similar issues.

Erika Zepeda, coordinator of the center, watched Armstrong grow during her four years at Cal Poly Pomona from a quiet freshman to an empowered advocate. “She has truly transformed into a true advocate for change, embodying all of the skill and passion needed to make the world more cognizant of gendered violence,” says.

This year, Armstrong introduced the Green Dot Violence Prevention program, a bystander intervention program that calls upon ordinary people to step in, raise their voice or simply show their support for safety. The Green Dot response, which originated at the University of Kentucky, ranges from calling the police when there’s a fight to stopping someone when they make a sexist comment to hanging a Green Dot poster.

“It’s important to realize that each person can do something very simple that doesn’t take a life-changing experience,” she says. “It’s about being present and knowing when to step in.

“Back yourself up with education and information, as well as support of people around you. You can do the right thing.”

Psychology Professor Felicia Thomas says Armstrong put in considerable time and effort to contact university administrators to bring the Green Dot presentations and training sessions to campus. “There was never a problem she could not or did not solve,” Thomas says. “She always was willing to go the extra mile and take advantage of all opportunities potentially available to her.”

After graduation, Armstrong plans to continue working in violence prevention as an advocate and counselor. She hopes to get a master’s degree in psychology or public health to better understand the roots of sexual violence and domestic violence.