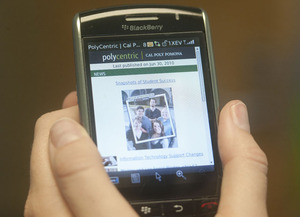 PolyCentric has launched a mobile version of its news website designed with iPhones, Droids and Blackberrys in mind. The mobile site, at http://m.polycentric.cpp.edu, is the product of a collaborative effort between I&IT Web Development and the Office of Public Affairs.

“Everybody’s excited about this because everybody wants it,” says Curtis Clark, director of I&IT Web Development. “Our testing by users indicates this should be a real plus for the university.”

According to some estimates by industry researchers, smart phone sales are expected to triple within the next few years and overtake desktop and laptop computers as the preferred method to surf the Internet.

“We’re trying to reach our readers where they are. More people are using their phones to check their email and surf the web,” says Esther Chou, PolyCentric editor. “It makes sense to create a mobile version of PolyCentric, allowing our readers to keep current on campus news and events while they’re on the go.”

To pare down the size of the main PolyCentric home page to fit on mobile screens, the design team identified the most popular features of the university’s news website. News stories, events and announcements get top billing on the mobile site, and the Picture of the Day displays the latest photo. The mobile PolyCentric also links to Cal Poly Pomona’s accounts on Facebook, Twitter and LinkedIn.

PolyCentric is the first of the university’s web pages that is going mobile. The university home page is being re-designed and its mobile version is expected to debut in about a year, according to Clark.

PolyCentric readers can access the mobile site by clicking on the “Mobile PolyCentric” link in the lower right portion of the home page. In the future, the design team hopes to add an auto-detect feature that automatically sends mobile browsers to the mobile site.

One of the challenges of the project is making the mobile PolyCentric readable on a variety of smart phone browsers.

“We’re hoping that in the next few years the mobile browser market will settle down to just a few popular browsers,” Clark explains. “This happened for desktops. For the near future, we are aiming at supporting mobile browsing in Internet Explorer, Safari, the Google Android browser and Opera. The overhead associated with writing and verifying code for all possible mobile phone browsers is high.”

Michelle Magcalas, online support specialist for Public Affairs, adds: “We’re excited that the partnership between Public Affairs and I&IT Web Development has been so successful in creating something that benefits the entire campus community.”