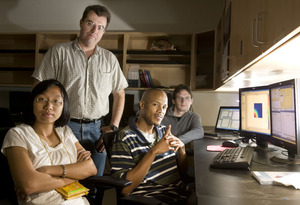 Michael Mansell’s interests range from theoretical physics to economic theory to computer programming, but he wasn’t always a whiz kid.

“I barely passed high school. My freshman-year GPA was 0.9. Sophomore year, it was 1-point-something,” he says. “I was a thug back in the day.”

Mansell, who was born in Riverside and raised in Baltimore, says he decided to change his life in 2003. Although he never got good grades in the subject, he always liked science and decided to challenge himself. He enrolled at Riverside Community College, taking remedial math courses to learn fractions and basic algebra. After three years at Riverside and four years at Cal Poly Pomona, he is graduating with a bachelor’s degree in physics, a published co-authored physics paper and tremendous enthusiasm for math and science.

Mansell says he struggled immensely but constantly reminded himself to persevere. The physics faculty played an important role in advising him on his academic path – which classes to take, what projects to work on, how to network – as well as encouraging him to continue with his dream of earning a degree.

“I could speak with them very freely,” he says. “I’ve always been able to be upfront and real with them. They’ve always given the best advice.”

Mansell also learned an important life lesson from his professors: “They made it very clear that although my circumstance is different, now that I’m here, it’s very important to not expect anything different. Always work hard and never lose that focus because people will treat you the same no matter where you come from.”

Physics Professor Alex Small, his research advisor, says Mansell has accomplished so much despite his challenges.

“It’s very rare for someone starting off in community college taking remedial math to get good grades in quantum mechanics. He’s done more than students facing fewer challenges,” Small says. “His level of enthusiasm is rare.”

In April, Mansell, Small and another student published a paper, “Theoretical investigation of optical patterning of monolayers with subwavelength resolution,” in the journal “Physics Letters A.” After graduation, Mansell plans to continue his research in nanotechnology, percolation theory and microcontrollers, as well as apply for graduate school. On the side, he teaches math and science at a private school and as a home tutor, and runs an online business.

“I would definitely encourage students to never forget why they came here, whether it’s to get knowledge or to go out and make money,” Mansell says. “Keep that solid within your mind and focus on it so you don’t get caught up in the other activities that can hinder or impede your flow.”

His motivation for going to Cal Poly Pomona?