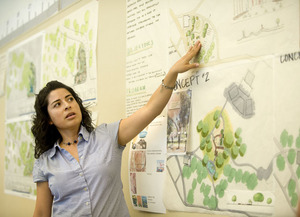 Knowing the difference between a Chinese pagoda and a Japanese pavilion was one of the lessons Erik Skovseth had to learn for a landscape architecture project. Understanding Japanese history and culture was essential in his intermediate design class assignment to plan a half-acre garden in Long Beach that would symbolize the city’s sister relationship with Yokkaichi, Japan.

“We didn’t have a huge grasp of Japanese garden culture, and how everything has meaning,” says Skovseth, a third-year landscape architecture student. “It’s important to know what you’re putting in the garden and what it means.”

Before any design work took place, adjunct professor Keiji Uesugi had his 19 students study the natural landscape of Yokkaichi, learn about its commitment to sustainability and environmental stewardship, and research the industries that drive the city’s economic engine. The class visited Recreation Park in Long Beach, the proposed site of the garden, on multiple occasions to ensure that their designs would blend with the city’s landscape and the surrounding park area. They also collaborated with the Long Beach Department of Parks, Recreation & Marine and the Long Beach Yokkaichi Sister City Association.

Skovseth and his team partner, Juan Ortega, planned their design around a coral tree, which represents age and wisdom. They also considered installing a rock garden, flower garden and some type of water feature. Ideas from other teams included a tea ceremony space, a decorative basin that collects rainwater, and a sidewalk map of the world identifying Long Beach’s eight sister cities. 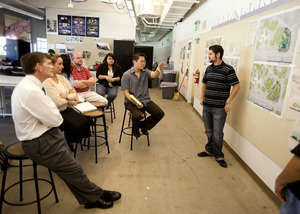 Students took their ideas from the drawing board to boardroom when they presented their plans to city officials on June 9. The city, along with the sister city association, plan to construct the garden based on one or more of the designs later this year.

Uesugi, who received his master’s in landscape architecture from Cal Poly Pomona in 2001, says the project is a great opportunity for students to see the big picture of how a concept becomes reality. The spring quarter project also allowed him to share his expertise in blending Japanese and Western design concepts.

During one class presentation, Uesugi counseled a team on the difference between a Japanese garden and garden that celebrates Yokkaichi. He used an example of a Japanese landscape architect who has the task of designing an American garden representing Long Beach. “Would you put a Statue of Liberty in the garden?”

“The designs have to be sensible, tasteful and representative. Students have to ask what each element means and how that fits into the Yokkaichi story,” says Uesugi, whose father, Takeo, designed the Aratani Japanese Garden on campus. 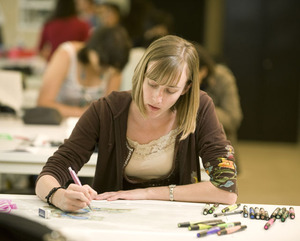 Throughout spring quarter, students met with and received feedback from Sandra Gonzalez, Long Beach’s manager of planning & development in the parks, recreation & marine department, and Michael Vaughn, president of the sister city association. After each meeting, students updated their plans to reflect concerns about traffic, public safety, flexibility, parking and maintenance.

Gonzalez, a landscape architect, says she’s learned a lot from students, too.

“We’re seeing things that are so out-of-the-box because students don’t have any preconceived notions,” Gonzalez says. “There are no constraints in their thinking. We’ve been very impressed with what we’ve seen.”

Gonzalez says she plans to continue collaborating with the university on various city parks and open space projects in the future.

(Top photo: Viviana Rodriguez talks about her design for a Yokkaichi (Japan) friendship garden in Long Beach on May 26. Middle: Adjunct professor Keiji Uesugi asks a question of Erik Skovseth during a presentation on the Yokkaichi garden in Long Beach. Bottom photo: Third-year landscape architecture student Natalie Brethorst works on a design for the garden.)