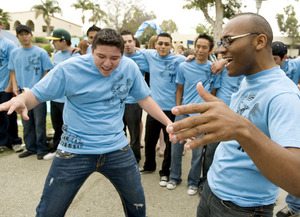 Cal Poly Pomona’s Greek Week raised $30,031 — the most in its history — to benefit charities and scholarships. The Greek community came together April 26 to May 1 to raise money through various events and to volunteer at community service projects. This year’s amount tops last year’s total by $2,419.

During Greek Week, about 2,000 students from fraternities and sororities promoted recruitment and philanthropy through fundraising and competition. Events included the Quiz Bowl, can structure, Olympics, Bronco Spirit Day and an awards banquet.

“Everyone did a great job this year, and you could feel the excitement in the air all week long,” says Christian Tran, a fifth-year kinesiology major and Greek Woman of the Year. “Every chapter worked very hard to pull off every single day of Greek Week.”

Proceeds of Greek Week will benefit the St. Jude Children Medical Research Hospital, the Christina Burmeister Memorial Scholarship, the DREAM Scholarship and the YMCA of Pomona.

Fraternities and sororities gathered 6,500 canned goods to donate to the Weed & Seed food bank in Pomona, a nonprofit organization that distributes food to the needy. In addition, students volunteered 3,565 hours — equivalent to 149 days — in the community. 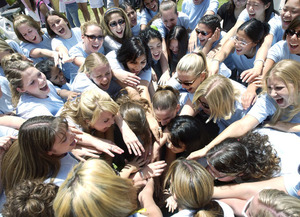 “I think it is important for all students to give back to the community. It gives them the opportunity to make a difference and remember where they come from,” says Jenni Adams, interim senior coordinator of the Office of Student Life.

On May 1, fraternity members helped spruce up Pomona by co-sponsoring Beautification Day, painting, cleaning and working in the garden at the Unity Church of Pomona. Sororities participated in the Great Stride Walk in San Dimas’ Bonelli Park on May 1 to raise money for children with cystic fibrosis. Students also volunteered at the St. Jude Children Medical Research Hospital.

The overall winners of Greek Week were Sigma Chi and Sigma Kappa.

(Top photo: Students sing during an event in the 2008 Greek Week. Bottom photo: The women of Chi Omega huddle and cheer during the 2004 Greek Week carnival.)