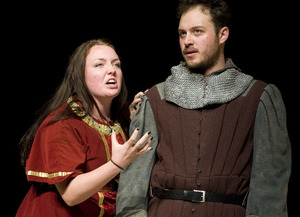 Lust for power, murder and the supernatural will be conjured up by the theater department in its production of “Macbeth.” William Shakespeare’s tragedy will open Friday, May 7 at 8 p.m. and run through May 16 at the Main Stage Theatre.

One of Shakespeare’s darkest and most fantastical plays, “Macbeth” follows the main character, a Scottish nobleman, as he begins a bloody descent into madness in his quest for power. Goaded by his wife’s ruthless ambition and the ominous prophecies of three witch sisters, Macbeth murders the king in an attempt to seize control of Scotland.

Director and theatre Professor Linda Bisesti says the unnatural becomes reality during the two-hour drama, from witches conjuring spirits to Macbeth committing horrible acts of evil. “It’s as if the events we think are hellish become natural,” she says.

At the same time, Bisesti adds, the show does not unilaterally portray Macbeth and his wife, Lady Macbeth, as ruthless villains. “It’s about a hero who falls from grace. It’s about a man who could have become a great king.”

Nicole Herman, who plays Lady Macbeth, says she tries to bring some humanity to her performance. “[Lady Macbeth] knows what she wants, and she knows how to get it,” Herman says. “The beauty of it is finding the vulnerability in this character, which is easy to overlook.”

The fully-costumed play, which is set in the 12th century, features 17 student performers, many of whom will take on multiple roles. Visual effects, lighting and sound will help create the production’s supernatural setting. 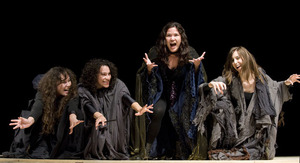