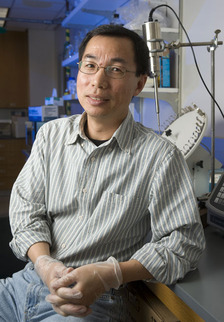 Professor Junjun Liu, biological sciences department, has received a $409,200 grant from the National Institute of General Medical Sciences for his cancer-related research.

The three-year grant helps Liu study a regulatory mechanism mediated by polo-like kinase, which controls progression of cell cycle. The enzyme indirectly regulates the modification of chromatin, which is a key mechanism in stem cell differentiation and the formation of tumors. Escalated levels of the enzyme have been found to cause cancer and other diseases.

Liu’s lab uses African Clawed Frogs and mammalian cells as model systems to study cell cycle regulation. The four graduate and four undergraduate biology students who work in his lab inject protein and RNA into frog eggs and then observe how the cell cycle is affected.

Liu, who joined Cal Poly Pomona in January 2008, is one of a few researchers who study the interaction between two regulatory mechanisms – phsophorylocation and ubiquitination – that control most of the cell functions.

“Most people study one mechanism at a time, but our research is novel because it studies the interaction between the two important cell cycle regulatory mechanisms,” he says. “This is an emerging and promising field in cell biology.”

Liu says cell biology is a very fast-advancing field. “New discoveries come up almost daily. This grant will be a good chance for Cal Poly Pomona students to get into modern cell biology, cutting edge research and one of the most exciting fields.”