“No, it’s south – south, near the bottom!” one student exhorted a friend who was about to place his San Diego State marker in Fresno. “No. Near the bottom!” Another student, trying to locate Cal Poly Pomona, edged her way in. “It’s over here, I think,” she said tentatively as she hit the target.

Finding all 23 CSUs on a map of the state was just one of the activities at the Road to College Tour. The main focus was helping the students find their future.

The tour, an initiative of the California State University and sponsor AT&T, is visiting nearly 40 sites in its monthlong trek across the state. The bus rolled into Pomona on April 16, stopping at two middle schools. The centerpiece is a bus filled with computers that participants use to get a lighthearted peek at college planning and to think about what they might want to study. The main resource, however, may be the college students who share their perspectives as they keep the tour moving.

About a dozen Cal Poly Pomona student volunteers wearing dijon-colored “Road to College” T-shirts greeted Fremont Middle School students who queued up near the bus. Off to the side, Maria Garcia, sophomore architecture major, offered encouragement to Guadalupe Lara, an eighth-grader who proudly confided that she had been admitted to I-Poly, the high school campus tucked into the southwest corner of the university. 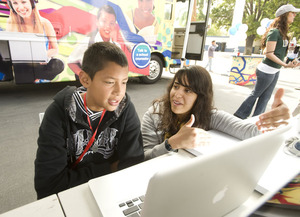 “You have to find something that you love, are good at and can make a good living doing,” said Garcia, a first-generation college student from Montclair. “It starts with an education. … I’ve had friends tell me, ‘Architecture’s not for you,’ but I say, ‘Yes, it is.’ Who’s going to be living your life? You are.”

Guadalupe confided that her parents did not go far with their education but were encouraging her to pursue her dreams.

“I want to go to medical school,” she said confidently. “Harvard and Johns Hopkins are my top choices, but UCLA is good too. I want to become a liver or kidney specialist – to help people with diabetes.”

Elizabeth Harper, the principal at Fremont, said her school is striving to create a college-going culture, which the Road to College tour abets.

“Cal Poly Pomona is just around the corner – it’s not a universe away. Having Cal Poly students here is a fabulous thing,” she said. “Our students can talk to them and say, ‘Wow, they look just like me.’ It’s great role-modeling.”

The bus tour in Pomona started at Emerson Middle School, where Cal Poly Pomona volunteers enthusiastically greeted students, who arrived at staggered intervals in groups of about 25.

“Now’s the time to get them to start thinking about college,” said Garland Dyer, a philosophy and psychology major who would like to become a teacher.

Electrical engineering major Ahmad Mahdi and industrial engineering major Valerie Ramirez, both first-generation college students – as were most of the volunteers – carried the same message: Get students thinking about college years before the first application deadline rolls around.

“We need to let them know they have options, but it all starts with an education,” Ramirez said.

“Not all of us have the chance to have our parents drive us to visit college,” she said. “Your life is a map. What road are you going to take?”

Mark Medina, like virtually every Emerson student who participated, waited eagerly in line for his “Road to College 2010” photo of himself, wearing a graduation cap and holding a “Class of” sign. His said “Class of Electrician.”

“That’s what I want to be,” the seventh-grader said matter-of-factly. “That’s why I need to study.”

John Heffernan, director of external affairs for AT&T, said the company has shifted its community outreach focus from technology to educational success in an effort to reverse the dropout rate.