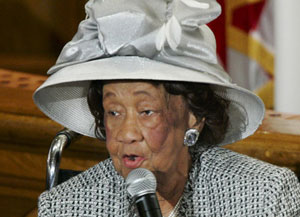 All flags on campus are flying at half-staff today as a tribute to civil rights leader Dorothy Height, who died April 20 at the age of 98.

Height directed the National Council of Negro Women from 1957 to 1998. She was a key figure throughout the Civil Rights Movement. She was the female team leader in the Civil Rights Leadership, along with the Rev. Martin Luther King Jr., Whitney H. Young, A. Philip Randolph, James Farmer, Roy Wilkins and John Lewis. At the 1963 March on Washington, Height was on the platform when King delivered his “I Have a Dream” speech.

Height was awarded America’s two highest civilian awards, the Presidential Medal of Freedom in 1994 by President Bill Clinton and the Congressional Gold Medal in 2004 through an act of Congress.