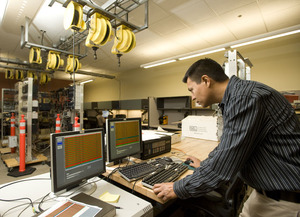 When you think of businesses you’d find on a university campus, bookstores and fast food restaurants are what often come to mind. At Cal Poly Pomona, high-tech industry leaders have also found a home on campus, and their presence is complementing the university’s academic mission and boosting the economic growth of the region.

In January, Southern California Edison joined Innovation Village, moving the core of its transmission and distribution engineering group from the company’s headquarters in Rosemead. Not only do these engineers design and maintain the region’s electrical system, they are also building the infrastructure for a smart grid and are on the cutting edge of delivering renewable energy to Southern California. A recent survey showed that about 20 percent of the engineers at Innovation Village are Cal Poly Pomona alumni.

“Universities are the drivers of good economic development,” says Ed Barnes, the university’s vice president of administrative affairs. “Innovation Village is doing what we envisioned — generating research, jobs and opportunities for students, faculty and graduates.”

Edison and the College of Engineering are working together in developing curriculum in the specialized field of power engineering. Edison is a perennial partner and sits on the college’s 20-member advisory committee.

“One of the biggest challenges facing Southern California Edison is the need for engineering talent. Our industry is undergoing major transformation as we convert our supplies of electricity from fossil-based fuels to renewable energy supplies and simultaneously convert our electric grid to be smarter and more efficient,” says David Mead, Edison vice president of engineering and technical services. “Our presence in Innovation Village enables us to partner with the university in many ways, including influencing the curriculum to ensure new graduating engineers are ready for the exciting challenges we face.”

Barnes led plans for Innovation Village about 15 years ago to attract research and development organizations interested in partnering with Cal Poly Pomona. The university and the companies jointly benefit from the infusion of fresh perspectives, collaboration among faculty scholars and working professionals, and employment of students and graduates. Once complete, the 65-acre technology park is estimated to have an economic impact of $500 million annually to the local economy. 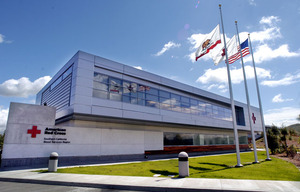 “The name ‘Innovation Village’ says to me that we’re separate organizations that have found innovative
ways to synergize with the university,” says Charlie Wilcox, CEO of the American Red Cross Southern California Blood Services Region. “This relationship is successful on a number of levels, such as sharing resources, attending community events and lectures at the Red Cross, hiring students as part-time workers and interns, hiring graduates, and recruiting blood donations from the campus.”

The development also includes the Center for Training, Technology and Incubation (CTTI), which allows emerging companies to nurture innovative ideas and projects. The 52,000-square-foot complex opened in 1998 and more than a dozen students have found internships or full-time positions with the incubator companies. Today, CTTI includes companies such as Mesa Associates, an engineering firm that works with electric utilities, and BioMedix, a biotech company specializing in food safety testing systems.

Innovation Village continues to grow. Construction is underway for a second Edison building, which is slated for completion in mid-2011 and will house about 400 power operations employees.

In May, Innovation Village begins its final phase of infrastructure improvements, funded by a $4 Economic Development Administration grant (including $2 million matching funds from the Cal Poly Pomona Foundation), that will include landscaping, sidewalks, street lights and a new sign Valley Boulevard and Temple Avenue.

The Foundation received the grant in 2006 and has used it to install vital infrastructure improvements to the technology park, underground the utility lines along Valley Boulevard and add new wet lab facilities to the CTTI building.