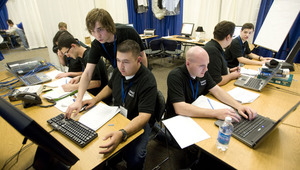 Another Cal Poly Pomona team is closing in on a national championship.

While the men’s basketball team was wrapping up its first Division II title in Massachusetts, eight students from computer science, computer information systems, and electrical and computer engineering were hunkered down on the second floor of the Bronco Student Center, matching wits with seven other college teams at the Western Regional Collegiate Cyber Defense Competition.

They all faced a common enemy: determined hackers – the Red Team – intent on disrupting, corrupting and sneaking into their computer systems during the three-day competition. The Red Team, consisting of highly skilled cyber professionals, probed for weaknesses and capitalized on them, just as hackers around the world are doing to businesses and government agencies.

By noon Sunday, the points were tallied and the final results announced: The Broncos had edged out Cal State San Bernardino to advance to the National Collegiate Cyber Defense Competition this month in San Antonio, an event sponsored by the Department of Homeland Security. They also earned complimentary passes and a speaking opportunity at the Black Hat Briefings this summer in Las Vegas, widely considered the ultimate gathering of cyber security experts and aficionados.

“It feels great,” said team captain Sean McAllister, who was savoring the moment after about 20 hours of intense competition. “We put a lot of work into this and it paid off, but we’ve got a lot of work ahead of us.” 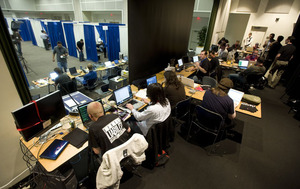 This marks the second consecutive year that Cal Poly Pomona has advanced to the nationals, no easy feat given the talent that was in the room.

Jeff Henbest, who competed for Cal Poly Pomona last year and was among seven team members hired by Boeing afterward, served as advisor this time around.

“I learned a lot of things I didn’t know about last year,” he said.

“Learning a lot” is vitally important, not only for the competition but for the nation’s security. Although they might not look the part – staring at a computer screen, sipping Red Bull and bantering with colleagues – cyber security experts are the fighter pilots of the Internet, dueling with hackers who are probing for weaknesses and trying to capitalize on them.

Reporter Adam Housley, who covered the event for Fox News, told a national television audience that the United States needs at least 60,000 highly trained cyber professionals in just the next three years to counter the growing threat posed by hackers acting on their own, in crime syndicates or under the auspices of another government:

The Western Regional Collegiate Cyber Defense Competition is run by the College of Business Administration’s Center for Information Assurance. Professor Dan Manson, who organized the event along with his colleague Anna Carlin, said that while the competition can be challenging, frustrating and exhilarating, it serves a larger purpose.

“The more hands-on training we can give the next generation of cyber security professionals, the better off we’ll all be.”