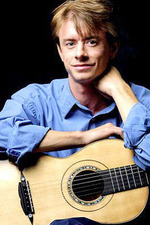 The music department welcomes back Stuart Green, a classical guitarist, who will present a free master class at 2 p.m. and an evening concert at 8 p.m. on May 7.

Green enjoys a busy schedule as a soloist and as a member of the Cabalo/Green Guitar Ensemble with Eric Cabalo. His performances have taken him across California and Arizona.

Green released his first CD in 2002 entitled “Recuerdo triste, The Guitar Works of Trinidad Huerta.” The CD has been played on National Public Radio, and in 2003, Green was a featured artist of the month.

In early 2008, he released his second CD, the first of three that will be the complete suites for guitar by Robert de Visee, a French Baroque guitarist/composer. This three-volume set will be the first time that these works have been recorded in full.

Green received his bachelor’s and master’s degrees in music from the University of Redlands.