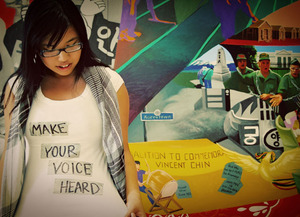 Cal Poly Pomona is celebrating Asia & the Pacific Islands Heritage Month in April with a series of events as part of the Speak Up! Campaign. Collectively known as iSpeak, the events address issues about the contemporary Asian-Pacific American experience and identity.

“The ‘Model Minority’ myth praises stereotypes of Asian-Pacific Americans as perfect students – always diligent, always respectful and never complaining,” Rocacorba says. “We hope these events will inspire students to speak up against discrimination and stereotyping.”

“America’s Next Top Model Minority,” which will take place April 8, explores how the “Model Minority” myth consequentially hurts Asian-Pacific Americans at home, in schools and at work.

Another major event is the “Urban Showcase” on April 13. The collection of performances, including one by former “America’s Best Dance Crew” contestants, will demonstrate the influence of Asian-Pacific Americans in the entertainment industry. GRV, Barkada Modern, Signal Flow and Chris Alanis will also perform.

April 1 – 28, Ongoing
Who am I? Exhibit
Asian & Pacific Islander Student Center, Building 95
Stop by the APISC and be a part of an interactive exhibit. Participants will take a self-portrait and answer the following question: “Who am I?” The exhibit will be featured at the closing ceremony.

America’s Next Top Model Minority
Building 66, Bronco Bookstore, Room 202
What is the “Model Minority” myth and how does it affect the Asian-Pacific American community? This event is hosted by spoken word artist Sahra Nguyen.

Speak Up! Art and Photography Exhibit: Meet the Artists
Bronco Student Center Art Gallery
Meet the artists behind the Speak Up! Campaign: Michelle Carrillo and Grace Alba. Refreshments will be served.

iHear: Two Sides to Every Story
Orion Suite, Bronco Student Center
The presentation of “Summer of the Serpent ” will be followed by an open forum about gender issues in the Asian and Pacific Islander community. The forum will be led by Professor Allen Coson from the political science department.

Against Racebending: A Closer Look at “The Last Airbender”
Aliso Hall, Building 23
Join members from the activist organizations Racebending and the Media Action Network for Asian Americans in a discussion of the casting of M. Night Shyamalan’s film adaptation of “Avatar: The Last Airbender.” Learn how Hollywood finds value in Asian and Asian American stories but often rejects performers of color.

Closing Ceremony: “This is OUR Story”
Ursa Major Suite, Bronco Student Center
A performance by the Here and Now Theatre Group will cover modern issues facing the Asian and Pacific Islander community.