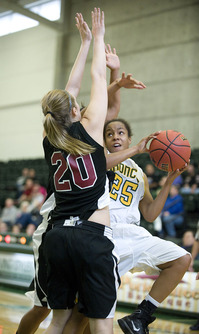 A season that saw Cal Poly Pomona win its most games in five years and its first NCAA Tournament trip in that time frame came to an end Friday night against University of Alaska Anchorage, one of the more physical teams in Division II.

Hanna Johansson scored a game-high 18 points mostly from inside and teammate Nikki Aden hit 17 points with three 3-pointers as the 14th-ranked Seawolves defeated the Broncos 69-50 in the opening round of the NCAA West Regional played at Seattle Paciifc.

Senior Stephisha Walton finished her two-year career with the Broncos with 12 points and 11 rebounds — her 11th double-double of the season, her 16th in her career and her 25th career double-digit rebound effort.

Her senior teammate Jessica Duran played the game of her Bronco life, scoring a career-high 11 points — all in the first half. Junior Reyana Colson was held to just 10 points on 3 of 15 shooting.

“When they made their run, we couldn’t stop them and we couldn’t make a basket,” said Coach Scott Davis. “You can’t give up 39 points in the second half to a team like Alaska Anchorage.”

The Broncos struggled from the outset, missing their first eight shots of the game. They battled back to tie the game five times in the opening 20 minutes and grabbed their first lead of the game on sophomore reserve Nicolette Brown’s basket from inside the paint with five seconds left and Cal Poly Pomona led, 32-30 at the break.

” I was very pleased that we contended and fought back after struggling to hit shots,” Davis said. “Jessica (Duran) played a big-time role in the first half and without her, we would have been in tough shape.”

“We talked about matching their intensity in the first five minutes of the second half. We did that, but we just didn’t hit shots.”

Walton gave Cal Poly Pomona its largest lead of the game at 34-30 when she hit a pair of free throws just 25 seconds into the game.

The Seawolves (24-4) then put the game out of reach with another pivotal run. This time after Johansson returned to the game with 5;41 left.

After Walton hit a jumper to pull Cal Poly Pomona to within eight points at 52-44 with 5:29 left, Aden’s pair of free throws started another 10-0 run. Leah Stepovich added a layup and a 3-pointer and Aden hit another 3-pointer and Alaska Anchorage led 62-44 with 3:38 left.

“We are usually a better defensive team than we showed tonight,” Seawolves coach Tim Moser said. “We thought our keys tonight were stopping Colson from penetration. She’s so dangerous when she drives, because she can either score or get the foul. We didn’t want her to score and I thought we did a good job of not fouling her.

“That’s a good ballclub there and Scott can be proud of what he has done in a short period of time. That’s a program that only going to get better.”

(Photo: Reyana Colson tries to get a shot off over Taylor Lydon during the Bronco’s CCAA tournament semifinal loss against Chico State on March 5, 2010.)