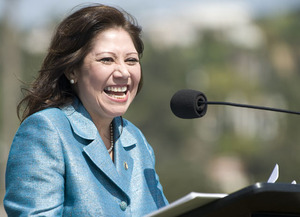 This year, the scholarship program increased the number of award recipients from eight to 10.

Many are first-generation college students, and the award is often a catalyst in the lives of the students and their families, says Lorena Marquez, coordinator of the Chavez Center. In the past 14 years, the program has given more than $75,000 to students.

“These scholarships encourage young people to pursue higher education and show them that help is available,” Marquez says. “The donations pay for the students to have the opportunity to strive and better themselves and their community.”

The Hilda L. Solis Scholarship Dinner and Reception, which is in its 14th year, honors prominent leaders in the Latino community with the Nopal Award and Tuna del Nopal Award. Arturo Rodriguez, president of the United Farm Workers (UFW), and Merlyn Calderon, national vice president and California political director for the UFW, will receive the awards.

“Their amazing leadership in the fight for farm worker rights and social justice keeps the legacy of Cesar Chavez alive,” Marquez says.

Tickets are $50 per person. For more information or to RSVP, email Lorena Marquez at marquez@cpp.edu or call the Cesar E. Chavez Center for Higher Education at (909) 869-5035.