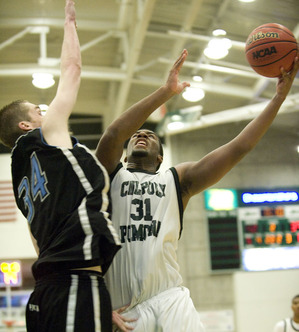 Any sort of monikers would describe the 2009-10 Cal Poly Pomona Broncos men’s basketball team – Road Warriors, March Magicians are a few good ones.

It will take one more victory over a familiar foe to add this beauty of a slogan:

In one of the most complete games played by both teams this season, Broncos’ All-CCAA forward Dwayne Fells scored the game-winning basket with 0.6 seconds remaining in overtime as the Broncos upset No. 15 Western Washington 76-75 in the NCAA West Regional semifinals Saturday night.

“Our guys showed poise, character and determination tonight,” said coach Greg Kamansky, whose team now moves on to the title game for the second straight year against BYU Hawaii for the right to advance to the Elite Eight. “We showed our experience tonight with one of the most competitive games I’ve been a part of because both teams were championship-caliber in a great college game.”