The recent San Dimas landslide near the 57 and 10 freeways provided exciting opportunities for geology faculty and students to study a real-life example just a short drive from campus. Jon Nourse, professor and chair of the geology department, visited the landslide on Feb. 18 and has been monitoring the cleanup efforts by Caltrans. He shared his insights into the possible cause of the landslide and prevention methods.

Q: What caused the landslide?

A: Generally, when you have a steep slope, there are forces that make the slope potentially unstable. My main suspicion is it’s something to do with the rainfall, beginning with the storms in December and a couple of big showers in January. The heavy rains must have infiltrated the ground.

Q: Is it normal for landslides to occur several days after the rain and on a warm, sunny day?
A: Such events have happened before in recent times; for example the Laguna landslide of June 1, 2005. This occurred several weeks after the end of a very wet rainy season. It takes some time for the water to trickle down into the ground. It’s not just soil; there’s also rock but not entirely solid rock. There may also have been a lubricant like clay along an incline fracture. The water pressure could have built up 20 to 30 feet down in the slope, and when the clay got wet, it became slippery. Wet clay is notorious for its low shear strength. With less friction, it’s easier for the mass above the rock area to slide.

Q: How unusual was this event?
A: This was sort of a random occurrence. The slope had been stable for more than 30 years. There’s usually more danger of landslides during a rainstorm. 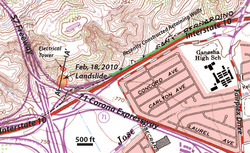 Q: How can similar landslides be prevented?
A: A number of methods are used to prevent landslides. The simplest technique is to lower the slope angle in a process called “grading.” Another way is to drain the water from the slope by building a sophisticated drainage system. Sometimes, the top of the slope will be covered with pavement or some sort of impermeable layer that directs the water off to the sides. The water collects at the bottom of the slope in a drainage channel. The most expensive way of stabilizing a slope is to build a retaining wall. You can see these along the 10 Freeway, east of the 57 Freeway. Not only is there a wall, but there are also large rods and bolts that provide reinforced support to the wall and the slope.