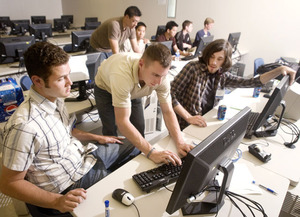 “If we were in a cyber war today, we would lose.”

The threat of cyber attacks is a growing concern – whether it’s hackers going after Google in China, cyber warriors probing for vulnerabilities at the Pentagon, or identity thieves victimizing shoppers online.

Cal Poly Pomona will host a cyber attack-and-defend exercise March 26-28 when eight student teams test their skills in the third annual Western Regional Collegiate Cyber Defense Competition. The event is designed to measure the students’ ability to manage and protect a commercial network while under threat from computer security experts who play the role of hackers. The winning team will compete at the national event, sponsored by the Department of Homeland Security, at the University of Texas, San Antonio, in April.

“The need for cyber security experts has never been greater,” says Dan Manson, a computer information systems professor at Cal Poly Pomona, which the Department of Homeland Security and the National Security Agency have recognized as a Center of Academic Excellence. “Students who survive this intense exercise of running a business while under constant attack gain tremendous confidence.”

Last year, Boeing hired six graduating members of Cal Poly Pomona’s team and tendered an offer to a seventh after he completes his studies. Boeing and Black Hat, a cyber security leader, are this year’s primary sponsors.

Five local universities and colleges will be among the eight represented at the competition: Cal State San Bernardino, Chaffey College, Mt. SAC, Westwood College in Upland and Cal Poly Pomona, which won the event last year. Teams from Cal State Dominguez Hills, Chico State and the University of Advancing Technology in Tempe, Ariz., will also compete.

Jeff Moss, founder of Black Hat and a member of the federal Homeland Security Advisory Council, will be the keynote speaker. Members of the winning team will receive complimentary passes to the 2010 Black Hat Briefings in Las Vegas and will present their cyber defense competition experiences to conference attendees.