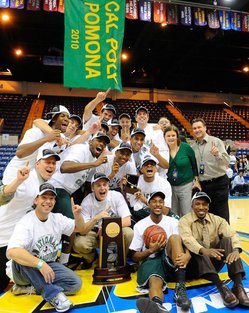 Greg Kamansky gathered his thoughts, waited a moment and said the word that was
unspoken for so long, but so true and on the minds of Cal Poly Pomona
fans and supporters Saturday afternoon.

“Redemption,” the Cal Poly Pomona Broncos men’s basketball coach
exclaimed after his team defeated No. 2 Indiana University of
Pennsylvania 65-53 for the NCAA Division II NCAA Championship before a
crowd of 3,672 fans at the MassMutual Center.

It was one year ago that the Broncos lost in the NCAA title game,
losing on a last-second, desperation 3-pointer from Findley’s Tyler
Evans in overtime.

There would be little doubt about this contest on a chilly day in New
England as the Broncos were out to claim their first NCAA championship
and the 14th NCAA title in school history.

CPP, which finished the season 28-6, took control from the outset as it
scored the game’s first eight points and never trailed against a team
that entered play on a 15-game winning streak. For the game, the
Broncos held IUP to its lowest scoring effort on the season and 25
points below its season average.

The Broncos became the first unranked team to win the championship
since North Alabama in 1979. They also became just the third school in
history to lose a national title and win the following year.

“I am so proud of our team’s effort today because it took our best game
of the year to defeat a team that presents so many weapons,” Kamansky
said. “That we held them to 53 points and stopped their big guns speaks
volumes about our guys.

“But it’s more than just defense. We hit shots during the entire Elite
Eight and we showed improvement from the foul line the last two games.
It takes a team to win here and I can’t say enough about how they mesh
together and play unselfishly.”

Junior Donnelle Booker scored a game-high 13 points and Tournament MVP Austin Swift and All Elite Eight choice Dahir Nasser each had 12. Junior Tobias Jahn scored 10 points off the bench with three rebounds. It was Jahn’s second straight double-figure effort in the tourney.

“Usually you can find one or two weaknesses out there,” Kamansky said
about IUP. “They have size, athleticism, and they can drive and they
can shoot. It was tough finding a weakness on them. We knew they were
explosive. (We couldn’t) let them get on any runs, which was easier
said than done. I don’t believe they went on any type of run that
influenced the game.”

The Broncos took command on 15-of-28 shooting from the floor in the
opening half and fired in five 3-pointers to lead 35-25 at the break.
Defensively, CPP was outstanding as it held IUP to only six first-half
field goals.

“That’s our mentality to come out blazing,” Nasser said. “We want to
win games. Our plan was definitely to lock down on their three-point
shooters. We had to get up on their shooters.”

Swift had eight first-half points and Nasser had six as CPP five of
nine from the 3-point arc to extend the lead through most of the
opening 20 minutes in double digits.

“I remember last year how Findlay came out in the first half,” Swift
said. “They gave it to us. We were down by a lot. We had the experience
from last year knowing how to prepare for games. We had the intensity.
We jumped out on them early. We just put our foot to the throttle and
came out with the win.”

“It was a combination of zone and man principles,” Lombardi said. “We
don’t really see anything like that all year. There was a learning
curve we had to go through. We practiced yesterday. We spent 20 minutes
on it. It took us awhile to figure it out. I am not talking about the
players. I’m talking about me as a coach. They’re long and they play
hard. They didn’t give us a lot of easy buckets. They did a good job in
the second half. We dug ourselves into some holes we couldn’t get
through.”

The Broncos took its largest lead of the game at 51-34 when Swift
canned two free throws with 11:13 left. Over the next 10 minutes, CPP
led by double digits until IUP made a threat in the final moments.

A Dwayne Fells
free throw put the Broncos up 59-48 with 1:37 left. The Crimson Hawks
responded with a layup from Ashton Smith and to cut the lead inside 10
at 1:24. After a turnover from CPP’s Mark Rutledge, IUP couldn’t answer as it picked two fouls on the next possession.

Rutledge buried a pair of free throws and CPP led again by double digits at 61-50 with 53 seconds left.

IUP set up on offense and Julian Sanders fired an errant 3-point effort, but was fouled by Swift, who picked up his fifth foul.

But the threat ended on the next play as Booker was on the receiving
end of a baseball pass. He caught the ball on the break and threw down
a dunk and CPP led 63-53 with 40 seconds left.

“The biggest thing about Donnelle is he can play with anybody,”
Kamansky said. ” In our regional games he was fantastic. The first
couple of games he had a bit of stage fright. Last night I told him to
unleash it. He was at ease today. You can tell by the way he played.”

The victory added two more season records to the list the Broncos added
this year. They will finish as the NCAA’s top scoring defense at 56.2
points a game and rank among the top 10 in field goal percentage at
50.4 percent.

Darryl Webb led the Crimson Tide with 12 points and Akida McClain with 10.

BRONCO NOTES: The Broncos’ 53.2 percent FGs marked the fifth straight NCAA game they shot above the 50-percent mark… During the 10-year Kamansky era,
the Broncos are 104-9 when they fire at least 50 percent from the
floor… The victory improved CPP to 100-17 when they hold a team to 60
or fewer points… Tournament MVP Austin Swift averaged
17.6 points during CPP’s six-game NCAA ride and 15.6 points during the
Elite Eight… The Broncos own a two-year record of 53-14 – the best
two-year ride in school history… The 28-6 record is CPP’s single-best
record of all-time; it’s the most wins in a year and ties for the
fewest losses (23-6 – 1963-64)… Darryl Webb of IUP and Taylor Witt and
Matt Schneck of St. Cloud State also were named to the All-Tournament
team.