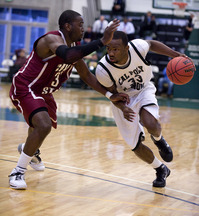 The Broncos (22-5), who are appearing in the tournament title game for the second time in three years, will play either Cal State San Bernardino or Humboldt State Saturday at 7:30 p.m. The Coyotes and Lumberjacks were scheduled to tip-off at 8 p.m.

Cal Poly Pomona, which led by 17 points at 72-55 with 4:52 remaining, withstood a late run by Chico State to extend its school-record winning streak to 15 games.

The Wildcats went on a 22-8 run over the final 4:52 and cut the deficit to three points. Successive 3-point baskets by Jay Flores and Damario Sims sliced the Broncos’ lead to 78-75 with 1:07 remaining.

Broncos senior guard Austin Swift hit one of two free throws with :08 remaining to take it to 79-75.

The drama was not over. Flores received the inbounds pass and dribbled up to near mid-court where he heaved a shot that hit the rim before bouncing off the backboard and falling to the ground.

The Broncos shot an impressive 66.7 percent (28 of 42) from the field and had five players finish in double figures. Joining Fells was Donnelle Booker (14 points), Dahir Nasser (13), Swift (13 points, 10 rebounds) and Mitchel Anderson (11).