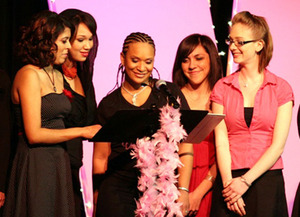 Despite the show’s title and its intense topics, the “Vagina Monologues” isn’t meant to only shock audiences. Student directors Samantha Muir-Valdovinos and Jenny Powell say the annual production, which covers subjects such as sex, love, rape and birth, has a larger message – spreading awareness about domestic violence and sexual violence.

“Whether you know it or not, there are women on campus who have experienced some kind of assault, domestic violence or rape. We want people to know that it’s not OK,” says Powell, an English education sophomore. “We need to make a change here and around the world.”

Muir-Valdovinos added that the “Vagina Monologues” isn’t simply an entertaining theater show. “We’re here to spread awareness about important issues that most people are afraid to talk about,” says the gender, ethnic and multicultural studies junior.

The English productions will be on Feb. 5 & 6, from 7 to 9:30 p.m., in the Bronco Student Center’s Ursa Major Suite. The Spanish production will be Feb. 13 at the same time and location. Tickets are $15 for general admission and $10 for students.

This year’s productions, with 45 women participating, are among the largest since Cal Poly Pomona first staged the show more than 10 years ago. Because the monologues are meant to empower people – both in the audience and in the play – everyone who auditioned received a part, ranging from a couple of lines to an entire scene.

Weeks before the performance, the actors and stage crew attended a weekend retreat to talk about the topics covered in the show and share their experiences. The retreat is an opportunity for students to talk about deeply personal issues, which may include rape, molestation and abortion, says Muir-Valdovinos.

According to the Rape, Abuse & Incest National Network, about a quarter of college-age women in the United States will be a victim of rape or attempted rape. In addition, intimate partner violence affects one out of four people in a dating relationship, according to the National Domestic Violence Hotline’s 2008 statistics.

Proceeds from the show will support the on-campus cultural centers, services at the Violence Prevention & Women’s Resource Center, and scholarships from the Cesar E. Chavez Center for Higher Education. In addition, some of the proceeds will be donated to V-Day, a global campaign committed to ending violence against women and girls.

For more information or to purchase tickets, visit http://dsa.cpp.edu/vpwrc/The_Vagina_Monologues.asp.