Professor Emeritus Jonathan Baskin walks through the shallow waters north of Pasadena as he carries an electrofisher, a mechanical backpack reminiscent of the contraption Bill Murray wielded in “Ghostbusters.” Baskin uses the device to transmit a weak current into the creek to zap nearby aquatic creatures momentarily unconscious.

Before the animals awaken, he scoops up as many Santa Ana sucker fish as he can. While this may seem like an unorthodox way to catch fish, it has helped ensure the survival of the species.

Baskin and others rescued 130 of the small, olive-gray fish from the Big Tujunga Creek in October, just before a storm moved in, because the animals could have been imperiled if the area were struck by mudslides. The fish were taken to a refugium in Riverside County, where they will stay for a year until conservationists can ensure their safety in the wild. 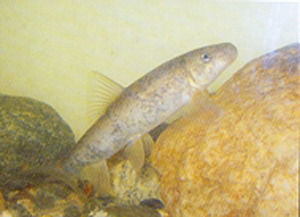 The Santa Ana sucker fish is one of only three native fish in the Los Angeles Basin, and its future is threatened because seasonal rains can trigger floods and mudslides that make the environment uninhabitable. Last August, the Station Fire burned much of the vegetation surrounding the creek, greatly increasing the danger – a danger that could be realized with this year’s El Nino condition and predicted heavy rainfall.

The next downpour is expected within days, and the charred landscape above the creek remains a risk, which makes Baskin’s actions all the more prudent.

“This species is important because it is one of a very few remaining native freshwater fishes we have here in Southern California,” Baskin says. “It forms an important link in this very fragile ecosystem of our local streams, which are so heavily impacted by human developments.”

According to the U.S. Fish and Wildlife Service, a threatened species, such as the sucker fish, differs from an endangered one because the classification gives rescuers more flexibility, including the use of an electrofisher, and the authority to transfer animals to safer areas.

There are plans to introduce the sucker fish to the San Bernardino Mountains, Baskin, says, because they could thrive in the secluded environment.

As a professor emeritus, Baskin continues to work and research with Cal Poly Pomona students and alumni.

“I enjoy this work because it is an opportunity to make a concrete difference that can benefit our local ecosystems and species.” Baskin says.