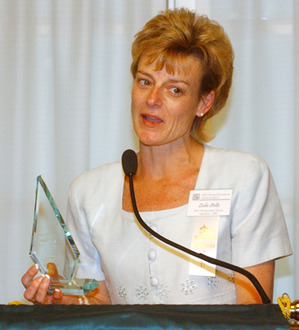 Leslie Ann Stoltz, a lecturer in the College of Education & Integrative Studies who was recognized as a Distinguished Alumni in 2002, has died. She was 54.

Stoltz earned her master’s degree at Cal Poly Pomona in 1998 and used her thesis as the framework for collaborating with Professor Doreen Nelson to develop the Design-Based Learning curriculum, which she implemented in her sixth-grade class at Chaparral Middle school in Diamond Bar. The program expanded to seventh and eighth grades, encompassing more than 200 students, and drew praise from educators, legislators and businesspeople.

During her time at Chaparral, she pioneered a multicultural exchange program between her classroom and a classroom in Japan, which became a prototype for interactive design using technology. She was a frequent speaker at area PTA meetings, presenting information on the importance of reading aloud, communication skills, homework success and parenting gifted children. She was Chaparral’s Teacher of the Year in 1997.

Her final two years were spent as principal at the Los Angeles Academy of Arts and Enterprise, a charter school near downtown Los Angeles. She helped transform the 400-student school and, in the words of Nelson, her mentor, “was the best teacher there ever was.”

Peggy Kelly, dean of CEIS, says Stoltz was a prized lecturer who pushed her students to be creative and think holistically about teaching and learning.

“Leslie was a teacher’s teacher,” Kelly says. “She cared deeply about her students — both 6 to 12 and master’s candidates. This is great loss for the education community and Cal Poly Pomona in particular.”