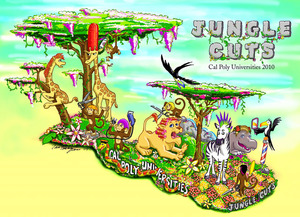 The Cal Poly Rose Parade float, recipient of last year’s inaugural Viewers’ Choice Trophy, is looking to be a cut above the competition again on New Year’s Day – but it can’t win without your help. The public will pick its favorite via an online vote, and the float team from Pomona and San Luis Obispo is counting on your support to help bring home the award.

Fans can vote online on Jan. 1 from 10 a.m. to 5 p.m. to recognize “Jungle Cuts” as the Viewers’ Choice Trophy winner by going to the KTLA website. There is no cost to vote, and viewers can vote an unlimited number of times.

“Jungle Cuts,” the universities’ 62nd consecutive entry in the Tournament of Roses Parade, promises to turn heads on Colorado Boulevard. The only float built and completely operated by students will feature wild animals receiving haircuts and makeovers from monkey barbers as a classic barber pole spins near a live-action waterfall.

The Rose Parade is scheduled to begin at 8 a.m., and for the 63rd consecutive year, KTLA Channel 5 will broadcast it. To make sure you don’t step away from the television and miss the Cal Poly Universities float, please note that it’s 56th out of 91 entries, just after the Long Beach Mounted Police.

The winner of the Viewers’ Choice Trophy will be announced on Saturday morning, Jan. 2, via a Tournament of Roses press release, as well as on KTLA’s 6 p.m. newscast.
For more information about the students’ rose float entry, visit the Facebook fan page.