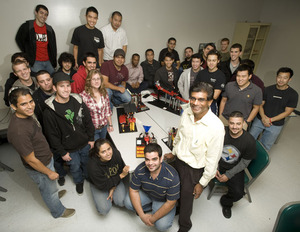 The California Assembly has honored 31 engineering students for their success in designing and constructing a device that identifies marbles into various containers based on their color. Presented by Assemblyman Curt Hagman, the award also recognizes Professor Mariappan “Jawa” Jawaharlal for his innovative teaching in the Introduction to Mechanical Design course.

The marble sorter is a typical project for emerging mechanical engineers, Jawa says. “The focus is on creativity. They have come up with many designs, and then build one. It’s like converting your dreams into reality,” Jawa says.

Working in teams, the students had six hours to design, build, program and test their machines. All six teams were successful.

“A 100 percent success rate is unusual in most class projects,” Jawa says. “It happened despite severe time constraints because every student was involved.”

Sophomore Jonathan Ortiz said his team came up with a number of concepts before settling on the final design, which can sort 10 marbles in about 15 seconds.

“We went through three completely different designs and evaluated each concept,” says Ortiz, whose team recorded the fastest time. “In the end, we tried to keep it simple.”

In addition to the marble sorter, students this quarter will build a can crusher and steel wire climber.