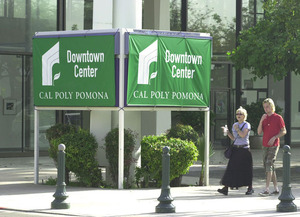 Cal Poly Pomona, in the midst of a budget crisis that has roiled public higher education throughout the state, is no longer able to operate the Pomona Downtown Center as a university facility. Cal Poly Pomona is working with its community partners to determine which activities will be able to remain downtown and which will relocate to other venues in Pomona, such as smaller neighborhood community centers. In particular, The School of Arts and Enterprise (SAE), a State of California charter high school that moved into the facility in 2002, is expected to expand its role and take on the day-to-day operations of the center.

“Over the past 10 years, the Downtown Center has been the impetus of some terrific community programs. There have been hundreds of outreach and service events, art exhibitions, performances and festivals. We greatly appreciate the efforts of the volunteers, nonprofits, donors, the City of Pomona, and the downtown itself that helped make all of this possible.” said Carol Richardson, dean of the College of Letters, Arts & Social Sciences. “But our diminished funding required this difficult decision.”

“I was saddened to hear the news, but given the extraordinary cuts in state funding these days, I understand Cal Poly Pomona’s decision,” said Ed Tessier, whose family has made donations to the Center over the years. “Fortunately, with the continued help of The SAE and other nonprofit groups, The Downtown Center will stay open. Though no longer operated by the university, it will continue to host cultural programs such as art exhibitions and plays. It will remain an anchor in the Arts Colony and continue to contribute to the revitalization of the downtown. That is a wonderful legacy of Cal Poly Pomona’s work here.”

In addition to its decade-long leadership at the Downtown Center, the university’s ties to the community run deep. For the last three years, Cal Poly Pomona has partnered with the Pomona Public Library as well as agencies throughout the city to offer various programs such as the NEA Big Read Initiative. Partner agencies have included the School of Arts and Enterprise, City of Pomona, Parks and Recreation, Pomona Boys and Girls Club, Pomona Unified School District, Pomona Historical Society, First Baptist Church of Pomona, Western University of Health Sciences and the YMCA to name a few.