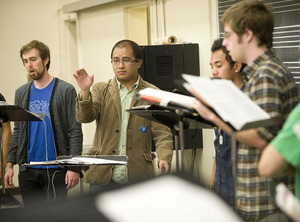 Music student EdCarlo Arafiles will conduct the first public performance of his original composition “Alleluia” at the upcoming “Anything Goes” concert, which will be held in honor of Charles E. Lindsley, one of the founding members of the music department.

Written spring quarter for an arranging class, “Alleluia” is a classical piece that includes elements from Gregorian chant and what Arafiles calls “his own little twist.” He says he was inspired to write a piece that has different rhythms and pitches intertwining to create something new and interesting.

The annual benefit concert begins at 8 p.m. on Thursday, Nov. 12 in the Music Recital Hall. Tickets are $15 for general admission and $10 for students. They are available online at http://csupomona.tix.com, at the Music Publicity Office, Building 24, Room 142 or at the door.

Arafiles, a winner of the Charles Lindsley Memorial Scholarship, has an impressive background and knowledge of music. Music Professor Susan Burns sings his praises: “He sings, composes, directs and plays the piano–an all around excellent musician.” He will direct the Kellogg Chamber Singers to perform the a cappella work.

The concert also includes students, alumni and faculty who will pull out all the stops to perform solos, duets, ensembles, classical, pop and Broadway tunes. Special guest artist Jonnie Darshan-Owens, director of community outreach for the College of Letters, Arts & Social Sciences, will also perform.

“After 10 years of themes ranging from ‘The Songs of Brahms’ to ‘A Night at the Opera’ to last year’s ‘The Feminine Voice,’ I just didn’t know where to go next!” says Burns, who will direct the show.”So I decided to call it ‘Anything Goes’ and see what that idea produced. I have had a great response from students and alumni.”

Proceeds from the concert benefit the Charles Lindsley Memorial Scholarship, which is awarded to outstanding vocal students for their academic excellence, performance ability and service to the department. Lindsley taught at the university for more than 25 years and created the Kellogg Chambers Singers and the Cal Poly Pomona Opera Workshop. He was a well-known voice teacher, and many of his students have professional careers in opera and musical theater.

For more information about the concert, contact music publicist Teresa Kelly at (909) 869-3554 or tkelly@cpp.edu or visit www.class.cpp.edu/mu/.