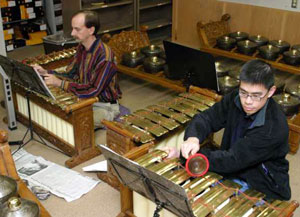 The American Gamelan is an ensemble of instruments from the classical Javanese orchestra known as the gamelan, but it performs new works by composers outside of that tradition. While these works may be based in traditional Javanese works, they have been adapted for this ensemble’s own expression, a tradition established in the United States by Lou Harrison and Bill Colvig.

Tickets are $15 for general admission and $10 for students. They are available at the concert, online at http://csupomona.tix.com or through the Music Publicity Office in Building 24-142. For more information, call (909) 869-3554.